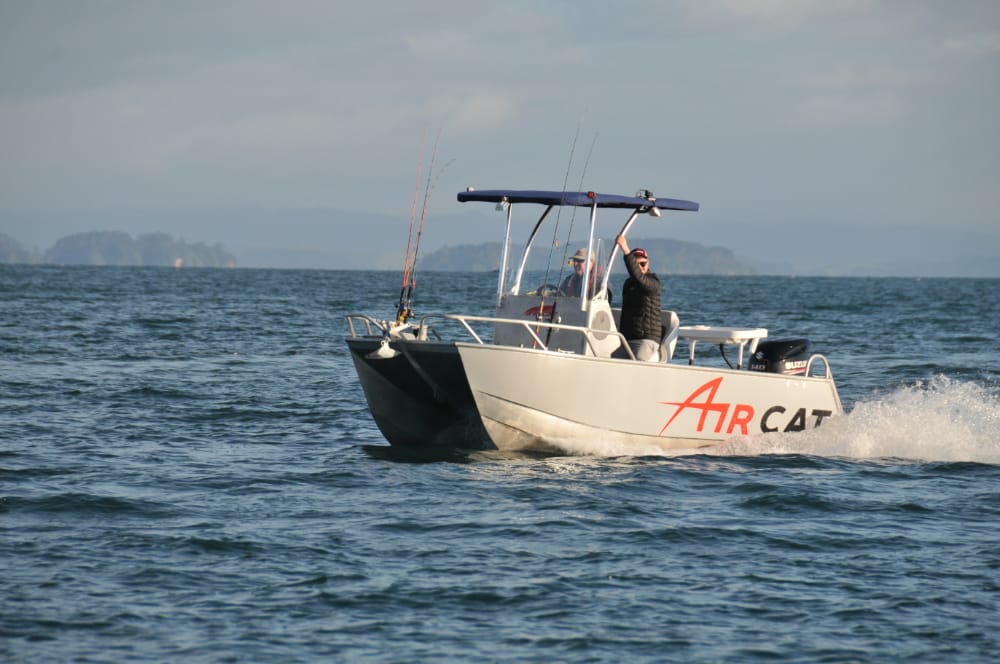 An easing in Covid restrictions allowed Sam Mossman to spend the morning aboard a new boat  the prototype AirCat 525.

Some readers will be aware of the FatCat 4000, a four-metre, rotationally moulded plastic power catamaran produced by Lightning Marine in Whangaparaoa, north of Auckland. The design is by Blair McLay (who worked for high-powered marine architects Pure Design) and life-long waterman Roger Tweddell. Branching out from this successful product, Tweddell has formed a partnership with Brian Nicholls of industrial fabricators Tekam Engineering in Napier to carry the FatCat concept into aluminium. This company, besides their general engineering work, has a number of boat builders on the team and also produced the specialist trailer for the new catamaran. This ‘Flipper’ trailer allows for easy retrieval straight off the beach and from very shallow boat ramps.

The partnership now has hull designs on the books for cats ranging from 5.8 metres up to 8.5 metres.

The first prototype, an AirCat 525 is a test bed for design and layout, and when Covid restrictions eased enough for us to share a boat, I travelled to Sandspit, north of Auckland to take it for a spin with Roger Tweddell.

There are many plusses to catamarans – a high degree of stability, a high load capacity and plenty of internal space being some of the main ones. But there can be issues if cat design is not done right: the breast plate can hammer in a head sea, they can lean out spookily in a turn, and they can suffer from ‘cat sneeze’ – throwing spray forward from between the hulls which curls back into the boat – and atomized mist coming out astern from the tunnel can be sucked back into the low-pressure area in the cockpit.

These were the first things I looked for as we headed out into the open sea from the sea-side settlement of Stillwater, and it was pleasing to find that the prototype of Blair McLay’s semi-asymmetric design had avoided all of these potential issues. It includes a ‘wave piercer’ between the outside hulls which is large enough to almost put this boat into the trimaran bracket.

One of the design concepts was for a soft-riding hull. In an earlier email Roger had commented that “both Brian (my partner in this brand) and I are in our 60s and are a little too old to put up with hard riding boats”. Being in my sixties too and starting to get creaky in the back and knee departments, I know where they were coming from. I and was well pleased when the cat turned out to be a soft, dry rider, the high breast plate and wave piercer adding a lot to the comfortable performance.

We ran out to the ‘Tiri Channel for a photo shoot, then continued north across Whangaparaoa Bay towards Kawau Island. The rig is set up with a single Suzuki 140hp four-stroke, which pushed the cat along nicely. Roger informed me that the rig can be adequately powered by a single outboard between 90-200hp. Certainly the 140hp Suzuki pushed us along quite nicely, and economically too (provided you are not heavy handed with the throttle). This latter feature is becoming a real issue as the price of fuel is cranked up ever higher. Fuel capacity is 140 litres carried in two removable stainless-steel tanks that fit in hatched underdeck holds towards the stern of the cockpit.

One of the advantages of centre console configuration is to open the bow area to fishing and to provide easy access for anchoring. A helm-controlled Maxwell drum winch is fitted in the centre of three lockers in the bow, the other two providing stowage spaces. Four-position rod holders had been fitted in each of the bow corners, useful for stowing rigs when travelling without obstructing forward vision but restricting the workflow up there a bit when casting or working a fish. (I believe these are to be replaced by a rocket launcher on the production model).

The fold-down seat fitted to the front of the centre console may be replaced by a fixed seat/stowage locker combination. The centre console itself is wide, providing plenty of shelter for two behind a polycarbonate screen, and housing a dash tray, glove box and plenty of protected internal stowage. Instruments and electronics mounted here include a Simrad sounder/plotter, VHF, switching, wheel and throttle/shift as well as the anchor winch controls.

An aftermarket bimini top on the test boat is probably higher than necessary and it is intended that the production model bimini will be about 1.95m off the deck and aluminium rather than canvas, incorporating the rocket launcher already mentioned.

Helm seating is provided by a pair of BLA Deluxe Sport seats which, I think, are probably the most comfortable helm seats I have ever sat on. Roger said that the same comment had been made by just about everyone who had used them. The new layout design for the production model includes footrests, a stowage locker under these seats, along with housing for a large aftermarket chilly bin to house the catch.

Side shelves run the full length of each side. The transom arrangement included a locker for the twin battery system, a centrally-mounted bait board and an in-transom live bait tank. The production model will feature twin transom step-throughs but will retain the live bait tank. Over the stern are treadplate boarding platforms, both with grab rails and a stainless fold-down ladder on the starboard side.

One of best attributes of powered catamarans is their application to fishing. Typically, they are beamy, offering a large deck area for their length. Having most of their buoyancy in widely separated hulls means they also have exceptional stability. Add this to a centre console configuration that opens the bow section as fishing space and allows easy access right around the hull when playing a fish and you have a lot of potential for anglers. This is specifically true for those employing fishing styles that include a lot of casting, such as lure fishing for fish like snapper, fishing surface lures for kingfish, fly casting and the like. Ideal for two anglers but easily capable of fishing more, this space separation allows lure casting without endangering anyone, and reduces tangles.

The easing of covid regulations to include boating and fishing came just in time to allow access to the spring snapper aggregations in the Hauraki Gulf. Piscine deprivation and cabin fever lead to traffic jams at the public ramps and a lot of boats on the water. In Whangaparaoa Bay I counted 101 boats in sight! As I quizzed Roger Tweddell about the boat and wrote notes we drifted across the open bottom, just paying lip service to the fishing by dragging slider-type lures along behind us. Spring fishing in the Gulf is pretty good and even this laisse-faire approach paid off with some solid snapper, kahawai and gurnard, interrupting proceedings on a regular basis and making a welcome addition to the big chilly bin in the cockpit. The cat made an excellent fishing platform and when the production model is fitted out appropriately, it should be a great fishing machine.

The 525 test boat was built to trial the design and get customer feedback on potential layout options for the production hull. The prototype had seen a fair bit of water time and planned alterations for the production model (to be called the AirCat 625) include: more rise in the shear lines; a 500mm increase in length; gunwales 150mm higher; deck 100mm higher (free draining) and reducing the height of the bimini top to 1.95m. The sealed deck is drained by duck-bill scuppers and the hulls are foam-filled for safety and stability.

This may seem like a lot of changes but of course that is what prototypes are all about – proofing concepts and improving designs. Basically, the proto-type AirCat 525 goes bloody well. The build of the first 625 production model should be underway within the next month, with the design work almost finished and the necessary materials and plant ready in a 2000 square metre production facility in Napier.

Now that the cat’s out of the bag, I can’t wait to see the finished product.